The seventh chapter of A Garland of Forgotten Goddesses, by Darry Dinnell, highlights Bahucarā Mātā (also spelled Bahuchara Mata), perhaps the single most popular local goddess in Gujarat state in western Indian. The translation is based on a local booklet about the goddess marketed to pilgrims in shops near the temple. One of the things I find most fascinating about the source is how starkly it contrasts to the goddess’s origin stories according to the majority of her local following. Whereas Bahucarā was long associated with non-elite groups such as the non-heteronormative Pavaiyas (Hijras), Muslim Kamalias, and several local tribal communities, the goddess’s rise to transregional fame in the past several decades has resulted in her unique history being largely edited out. The essay portion of the chapter fills in these gaps with summaries of her competing origin narratives and the social context of her traditional followers.

The image below, created for the book by artist Laura Santi, depicts the most commonly visualized form of Bahucarā: as a young lady bearing weapons and seated up a giant cock. 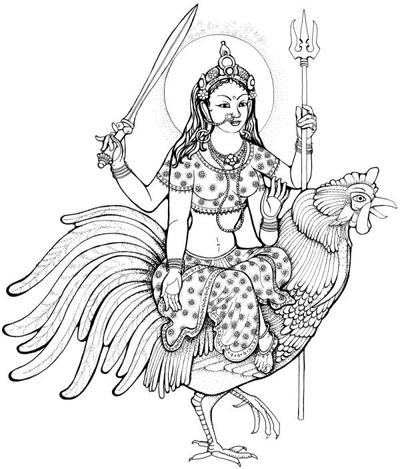 I selected the two passages below, translated from the Gujarati by Dinnell, to highlight the aforementioned contrast between references to non-normative sexuality in the translated narrative (the first passage) and that of more traditional local accounts (the second passage, from the essay portion of the chapter).

The very place upon which the ritual fire sacrifice was done—a pit, following the custom of the scriptures—having been filled with water from the underworld, is the “Mansarovar” of today. From bathing here, one can destroy inclinations against the laws of nature, and in that way they are put at ease. Nearby is a lake of life-­giving water. It is here that Mātājī brought forth onto the earth the spring of water from the underworld, after slaying the sly demon Daṇḍhāsur with her trident. Bathing in this water manifests manliness in a man devoid thereof. From taking a bath here, many a male lacking manliness is made into a complete man. Here is located the watch-­gate of nature spirit Jṛmbhak. In this manner, renowned miracles in the Mahābhārata took place: Śikhaṇḍī, born as a daughter of Drupad, became male and fought against his paternal grandfather Bhīṣma in battle; the powerful warrior Arjuna performed a loss of masculinity because of a curse from a divine damsel of the heavenly world; the celestial musician Akṣasena became cursed in heaven; the young Brahmin Yaśodhar came to protect the hero Vikram; and Rājkumar was born from the famous Rājkumar Solanki lineage— these are all examples that have risen in the popular imagination. A much more recent example comes from Dhandhuka Taluk’s Aniyali village, where a young woman was transformed into a man. Mā frequently grants a vision to her devotees, freeing them from suffering.

Bahucarā Mātā has multiple origin narratives that reflect the various groups that have shaped her history. In one of the most prominent accounts in the folklore, Bahucarā is presented as a girl from the pastoral, bardic Charan caste who undertook a journey between two villages along with her sisters and other members of her community. On their way, the party was intercepted by brigands from the Koli tribe. With her chastity at risk, Bahucarā promptly grabbed a sword from a boy in her group and cut off her own breasts, perishing on the spot. Her sisters also killed themselves, and as a result all three young women became goddesses. The spot where they died was marked by memorial stone slabs, and later these developed into small temples that are said to have expanded into the present-­day Becharaji site. In another version of this tale, Bahucarā fends off analogous male attackers by threatening to compromise their masculinity and follows through on the threat.

Suśruta on Determining Envenomation Status of a Patient