The fifth chapter of A Garland of Forgotten Goddesses is part of the second section of the book. Whereas the first four chapters focus on goddesses who battle with demons, the fifth through eighth chapters shift the focus to the relationships between goddesses and their devotees. Chapter 5 is written by Jessica Vantine Birkenholtz, and tells the tale of the goddess Svasthānī, and how performing the vow/pledge (vrata) to her brings innumerable benefits to humankind. While men can perform the vow, it is primarily a women’s tradition, and women predominate in contemporary performance of the vow in Nepal.

In the image below, the artist depicts Svasthānī surrounded by the Eight Mothers (aṣṭamātṛkā), who serve and protect her. These are the same Mothers who featured in the previous chapter, with the addition of Mahālakṣmī. 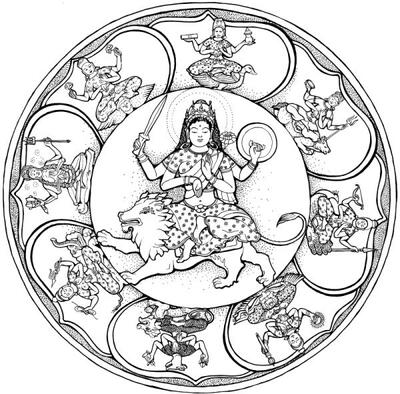 The core text of the Svasthānī tradition is the Svasthānīvratakathā. The oldest surviving version, selected for translation in the book, is written in Sanskrit. By contrast, for most of the past 500 years, the story circulated in the Newar language of the Kathmandu Valley. Today it is accessed in Nepali and English translations as well, and also through smartphone apps.

The bulk of the text consists of a story about the first humans to receive knowledge of the vow, and the dramatic impacts its performance had on the circumstances of a particularly troubled family. Since the focus in this post is on the artwork and the vow, the following excerpts from Jessica Vantine Birkenholtz’s translation highlight those.

“On the fourteenth day of the bright lunar fortnight in the month of Māgh (mid-­January to mid-­February), women should perform the vow of the Supreme Goddess Svasthānī, which is called the king of vows. On that day, after rising early in the morning and bathing, a woman should dress in pure clothes. She should eat but one meal a day, sleep on the ground, and conquer her senses. After rising at the holy hour, one should take a ritual bath according to the prescribed rules. Then, at daybreak on the day of the full moon, one should begin the preparations for the vow.

“One should make a maṇḍala with other women, and then present the guest offering along with food, lamps, and areca nut, together with flowers, incense, and fruit. Then she should worship you and me in an image upon the maṇḍala, with 108 flowers, sandalwood, fruit, incense, and grain. Then, after circumambulating us both, she who is endowed with devotion should feed the Brahmins and give them a donation. One should then listen to the story with devotion and worship Pārvatī, queen of the world. Then, after combining sesame and coarse sugar together, mixing it with wheat flour, and frying it in clarified butter, she should offer to the Supreme Goddess 108 pieces of bread, understanding the significance of the bread and her devotion. Having made this offering to the goddess, one should meditate on righteousness. One should concentrate on Svasthānī in action, thought, and speech. According to the precepts of the vow, O beloved, sprinkle sandalwood and whole rice on her image with devotion. Svasthānī .

“Then one should reflect on her in meditation. Her beauty is luminous like the color of gold. She has three eyes and her face is like a lotus. She sits on a throne that is a lion and is decorated with all kinds of ornaments. In her left hand she holds a blue lotus while making the fear-­dispelling gesture. She holds her right hand in the boon-­giving gesture. In her other right and left hands she holds a sword and shield upraised, respectively. Such is the image of the Supreme Goddess Svasthānī. Such is also the image of Śiva. The only different feature is his vehicle, which is a bull. One should meditate on me in this four-armed form, and also the god whose symbol is the bull. Thus, meditate on Svasthānī and the Lord of the World, O Great Goddess.

Link about Garuḍa Sacrifice in the Atharvan Tradition