Artwork of A Garland of Forgotten Goddesses, Part 9 of 12

The final section of A Garland of Forgotten Goddesses is titled Tantras and Magic. As I explain in the introduction, the Tantras are the scriptures of the last of four major developments that shaped classical Indian religions, and arguably the most important, yet understudied class of goddess scriptures. Several of the earlier chapters have Tantric elements, but are largely non-Tantric in character. The tale translated in chapter 9 comes from a literary genre, but the themes of Tantra and magic predominate in it.

The goddess highlighted in this chapter is Rangda from the islands of Bali and Java in Indonesia. Rangda’s identity is complicated by the fact that she is widely regarded as a form of the Hindu goddess Durgā, and yet the classic story (called Calon Arang) poses her as a human widow who cultivates a relationship with Durgā. The essay portion of this chapter, written by Thomas Hunter and Ni Wayan Pasek Ariati, explains how the Calon Arang story and its characters are built on an even older tale in old Javanese called the Sudamala, in which the female lead Ra Nini, who corresponds to Rangda, is unambiguously linked with Durgā.

Laura Santi’s dynamic illustration of Rangda for the book illustrates the wildness and power of her morally ambiguous character. She holds a lontar manuscript of a Tantric scripture in one hand, and dances in honor of Durgā and to protest society’s mistreatment of her daughter. 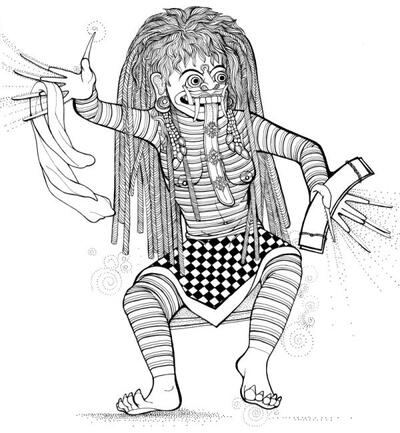 The following passage from Hunter and Wayan’s translation introduces us to the crux of the problem, to be worked out in the rest of the story: that nobody will marry the widow Rangda’s daughter because the mother is rumored to practice Tantric rituals. The story at first conveys the public perception that Tantric magic constitutes “the evil arts,” but this overly simplistic stereotype of the Tantras is complicated by the ending.

Now at that time, the widow of a nobleman lived in Girah, named [Rangda]. She had one child, a daughter named Ratna Manggalī, meaning Auspicious Jewel, who was very lovely in form—a true “ jewel of the palace.” But a long time had passed, and no one had come to seek the hand of Ratna Manggalī—none from Girah, let alone from Daha or the neighboring countries. There was no one anywhere brave enough to seek the hand of Ratna Manggalī, the child of Rangda of Girah, for it was widely known in the world that the Lady of Girah practiced the evil arts. All kept a distance from seeking the hand of Ratna Manggalī. Rangda then said to herself, “Ah, what is it that is making it so no one seeks the hand of my daughter? Even though she is beautiful, there are none who ask after her. It pains my heart. And so, I will make use of my sacred book of spells. I will take up my precious Tantric book and will approach the feet of the great goddess Śrī Bhagawatī (Durgā), asking for her favor, that all the men of this country be annihilated.” Taking up her book, Rangda went to the cremation ground with all her pupils to beg for assistance at the feet of the Supreme Deity, the Goddess Bhagawatī.