Artwork of A Garland of Forgotten Goddesses, Part 3 of 12

This next line drawing created for A Garland of Forgotten Goddesses is Kauśikī, a girl-form of the Great Goddess who fends for herself (quite capably!) on a mountaintop beset by fearsome demons. 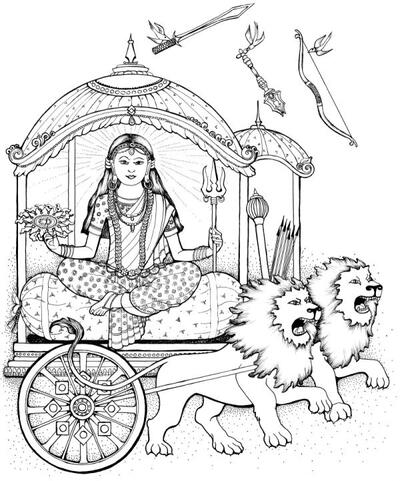 The story is from a thirteenth century collection called the Magic Jewel of Śiva’s Deeds (Haracaritācintāmaṇi). As the title suggests, most of these elegantly composed stories are about the god Śiva. In the current one, however, he is absent and the Goddess Kauśikī takes center stage.

Here are a few tidbits from Judit Törzsök’s excellent translation from the Sanskrit:

Then the goddess asked Barbarian to tell her the whole story. Barbarian,
whose mind was completely deluded and whose body was tightly bound,
started speaking: “The lord of demons, who has conquered all the gods,
demons, and humans and is now the ruler of the universe, has decided to
choose you as his wife, O beautiful goddess. With due respect, a girl must be given in marriage. And where could one find a husband like him? So consider yourself honored to be his wife, that is what I suggest.” When she heard him speak in this way, the charming goddess smiled gently, and, with a brow slightly raised, spoke these sweet words: “Indeed, a woman must have a husband and a man must have a loving wife. Which woman would not desire such a handsome man, who is also the richest in the world? All righteous men know, however, that only a father can give a girl in marriage. She may also organize a marriage contest for herself, or alternatively, she can be taken by force. I do not know who my father was, so who else could give me in marriage? And I have no notion of what is appropriate, so I cannot hold a marriage contest. Now what else can I say? The lord of demons is powerful, if he takes a wife for himself by force, what else could be more appropriate? You should go and tell him about this, Barbarian. I command you, Pāñcāla, to release all the ogres from the chains.”

After these words of the goddess, Pāñcāla released them. Seeing them without the chains, Kauśikī spoke again. “These ogres who have been produced from Barbarian’s body are my followers called ‘the barbarians’; they are without the sins of greed and egotism. By looking at me, they have become valiant, these barbarians shall only think of me. Even those mortals who are born in their lineage shall obtain the highest good, since they will also be purified by their devotion to me.” When Durgā spoke in this way, all the ogres produced from Barbarian’s body started worshiping the Mother of the Three Worlds, with great devotion.

Artwork of A Garland of Forgotten Goddesses, Part 10 of 12