Chapter 11 illuminates the Tantric “goddess of desire” Kāmeśvarī. Her chapter in A Garland of Forgotten Goddesses differs from all the previous ones in that the passages are not strictly speaking narratives, but instead consist of vivid descriptions a practitioner uses when visualizing the goddess during a Tantric ritual. The most fascinating part of this chapter is the fact that the author, Anna A. Golovkova, has uncovered the forgotten history of a goddess worshiped by millions of people today under the name Tripurasundarī. She did so through the exciting and painstaking work of reading never-before published ancient manuscripts.

In the image below, Kāmeśvarī’s allure is clear. She holds a noose to ensnare objects of desire, an elephant goad symbolizing control of the senses, a sugar-cane bow, and flowers as “arrows”that make people fall in love. 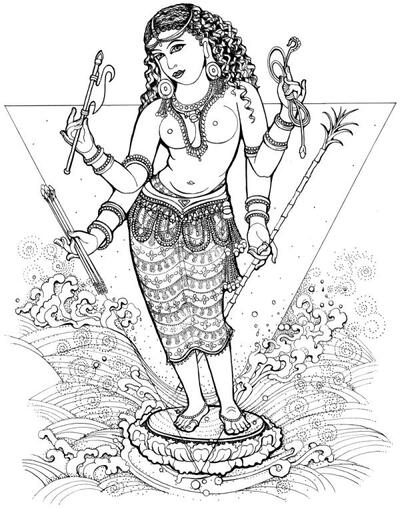 In these posts I have refrained from showing samples of the original texts, but the oldest passage translated is based on a very special scripture that reaches us in only a single palm-leaf manuscript in Kathmandu that is badly damaged. If this one artifact had not survived, we would know almost nothing about this fascinating back-story to Tripurasundarī.

The Nityākaula survives in this single palm-leaf manuscript from Nepal.

Bhairava spoke to the goddess about the ritual and its benefits: “The person performing the ritual should install a seat in the manner previously described, and then draw the hexagonal fire maṇḍala, a Tantric ritual diagram. In the middle … he should visualize the goddess holding a flower bow, a cup, and a citron, … beautiful, charming, and lovely, with intoxicated eyes reddish in the corners, … heavy breasts, and arms slender as a lotus filament, adorned with a resplendent diadem, her face shining with a reddish complexion, bearing a crest of matted hair, three-­eyed, … resplendent with red flowers, her limbs rubbed with reddish ointment, … radiant like a red firefly, the creatrix of passions reddening this world with desire… At her side is the Archer (the god of love), established at the end of the eastern spoke, and the goddesses who look just like her are established in the entire maṇḍala. Their names, O slender-­waisted lady, are Hṛllekhā (the Heart’s Furrow), Kledinī (the Moist), Nandā (the Rejoicer), Kṣobhanī (the Agitator), Madanāturā (Afflicteḋ with Love), Nirañjanā (Beyond the Passions), Rāgavatī (Enamored), Madanāvatī (Intoxicating), Khekalā (Skillful in Flight), Drāvan ī (Putting to Flight), and Vegavatī (Swift). These goddesses are eleven, and Madana (Maddening, i.e., the god of love) is visualized as the twelfth. Together they pervade the entire diagram, occupying the spokes and the intermediate places.

“The adept should worship this great cakra, O fair-­waisted goddess, O lady with lovely thighs, with offerings of red jewels… Women of the subterranean regions and other females will tremble, falling under his spell, just by being thought of… And he will roam the earth, like the god of love Kāmadeva himself, … traversing on foot the entire kingdom.

… “He should visualize the subordinate goddesses dressed in red garments, with eyes reddish in the corners, … beautiful, with blue lotuses in their hands, … all of them intoxicated and lovesick… Having worshiped them with perfume, incense, and garlands, he should perform a visualization of the principal goddess, O auspicious one, just as I will tell you.”

Artwork of A Garland of Forgotten Goddesses, Part 1 of 12